This time my interest falls to the Microprose published game of The Legacy. It is a blend between a traditional RPG and an adventure game and one of the first that combines those two elements. The atmosphere and settings of a horrorgame has always attracted me. And my fond memories of Elvira, Elvira II and Waxworks came to mind. 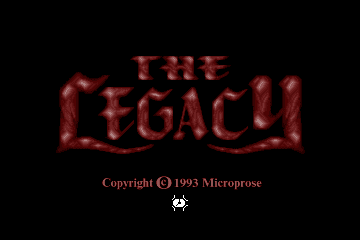 I know I really don´t have the patience or cunning for adventure games where combination of items and spotting of pixels eventually solve mysteries. But I don´t give up as long as my interest are there.
The game comes with a huge 65+ pages manual in classic Microprose style which means very well written. Note however that Microprose is the publisher and not the developer of this game. Microprose aquired the famous text-adventure company Magnetic Scrolls in 1992 which previously had produced the famous games The Pawn, Guild of Thieves and Myth to name a few.
I think the Preface of the manual sums up this game pretty well:
You start out the game by selecting one of eight predefined characters. All of whom is a heir to this huge mansion but with different abilities. Every character has three primary skills: Knowledge, Dexterity and Strength and each of them has secondary skills like first aid, brawling and firearms for example.
If you want you could customize them but contrary to my normal procedure I just choosed one of them and started the game. My first smile came when I took a closer look on the guys t-shirt which said “Gunship 2000” – another brilliant helicopter simulation from Microprose at the time. Anyway, my character had no magic but was stronger in all other skills instead. Let´s see if that is something I will regret or not later on.
After the short intro you start out just inside the door to the mansion. There is no going back. What first stroke me was the “modern” gui of the game. A dos-based game with a windows based interface. You could even resize the windows and place the windows wherever you wish. Probably the first dos-based game I have seen with that feature before all games started to be played from within Windows instead. It also reminded me a little about the Amiga game Uninvited.
I started to examine my immediate surroundings. The hall features a lot of doors in all directions plus the stairway leading to the second floor with even more doors to explore. I found a spellbook and some notes and when I started to explore the adjoining rooms I came over more notes from Robert that told me more about the house, or rather, about the horror that inhabit the house. Those notes helped to increased the atmosphere of the game. The mansion was built in 1639 by its first lord who himself was burned at the stake in 1662. His son inherited the mansion but died in a fire a few decades later, assumingly by a lantern having been tossed through a windows. Since then many strange things have been seen and heard from the mansion.
Fortunately the game features a pretty good automap in the lower left corner and that will be needed beceause I discovered after a while that this house is huge. I found a lot of different items like empty vials, a revolver, crystals, a keyring a safebox and so on. Since you have very limited storing capacity, only able to carry four items plus what you carry in your hands I had to drop all notes and items not of immediate use. That also means I will probably have to draw my own map so I can remember where all items are or areas of special interests. At this time (1993) automap was still a rare thing and being able to make notes even rarer.
It did not take long before I stumbled into the first inhabitants of the base floor. Zombies walking the long corridors. Since they move in realtime I discovered that they never enter closed doors so I could try to sneak past them or waiting for them to pass before making my exploration of the corridors. I did not wan´t to get into unneccessary fights. My revolver only had 6 bullets.
I also discovered that my experience bar had increased. Probably by exploring new areas and picking up items. What I do like is that you could increase any skill by paying with experience on the fly. There is no level up but a gradual increase in experience with which you could buy more skills. I like that. But for now, I save everything until I need it.
My plan was to explore the first flooer without going up or down (I did find a way down to the basement as well). I avoided all zombies roaming and only once opted to fight because I had just found a brass handle to use as a melee weapon. That worked quite well even though I got a little injured. I also found a room with a strange symbol which I think is a safe place to rest on.
In the north I eventually found a room with a grammophone but also a skull. I am sure this strange item will be used at a particular place later on. 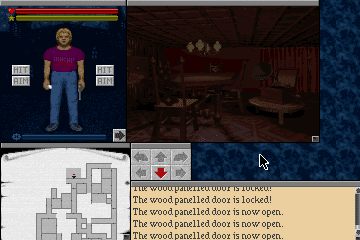 After a while I think the graphics got darker and it was harder to see. I don´t know if the time advances in the game but I fould two different clockworks and they showed different times. I think I hastily found a torchlight but got killed when I tried to pick it up. The problem as said before is that you have very limited space and have to drop something else which means you have to figure out what first. Not easy when zombies are attacking you from behind.
The only other entity I met was some sort of flying monster which terrified me so much that I couldn´t move. But other than that it seemed harmless so I just had to wait it out before proceeding.
So far I have not yet found any puzzle or problem to solve. I still have areas to explore and when I run out of them I will go down to the basement or upstairs. Sooner or later I expect to solve some puzzle before being able to move on.
My first impressions of the game are quite good so far. I am gathering a few items. The crystals seems to enable me to mediate to increase my mana. The first kits increases my health. Though it depends on my skill. The combat seems a bit odd with both a hit and aim button. I am not really sure how it works yet so I have just pressed the “hit” button and waited for the aim bar to increase before hitting again. The music is almost non-existens and and only some ambient sounds could be heard except for some sinister laugther or a door opening.
The standard dos-box configuration from gog.com was pretty slow so I had to increase the cycles for the movement in the game to feel smooth.
I will continue playing this game and return when I have found more information about what kind of problems I´m standing against.
Do you have any comments or wan´t to share your own experience ? Please comment.