When we left off last time, Alexander had just entered the Minotaur’s Labyrinth and fallen down a pit, with the game giving me a clue that the Cliffs of Logic aren’t the only place on this island where I’d need to refer to the manual.

I check out the manual’s “The Catacombs” section for clues. The manual tells me that “The Ancient Ones built death traps into the catacombs and filled it with dead-end paths, maze-like corridors, and rooms where secret knowledge is needed to pass.” Sounds intriguing.

Reloading to before I enter the catacombs, I quickly go back to the Isle of the Crown to make sure I’ve got the tinderbox before properly exploring the underground catacombs. While there I try to give some of my other items to the pawnbroker.

I can’t actually remember where I got that brick – I could go through my save games but screw that, let’s just say I somehow have a brick in my inventory.

BACK IN THE CATACOMBS

I continue to explore randomly, reloading every time I fall into a pit. After not too long I find a room with tiles on the floor. The tiles have symbols on them. Let’s have a look at the manual.

Taking the clue/copy protection answer from the manual, I step on three roses, then a scythe, then a crown, then…

So, starting again, I click on the ‘northern’ rose first, then the next two, then the scythe, then the crown…

I continue exploring, and find one room which is slightly different from most – it has a shield on the wall.

I also find a skeleton with glinting coins on its eyes – there are skeletons in the walls in many rooms, but most of them are empty – or at least I assumed they were empty after the first few and didn’t click on most of them with my eye. I expect I haven’t dead-ended myself but this IS a King’s Quest game so… 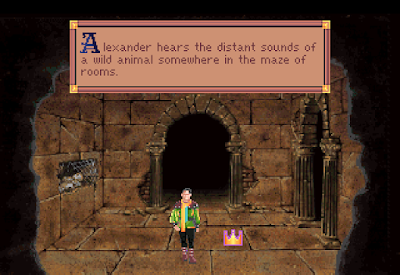 I also meet a female “Winged One” 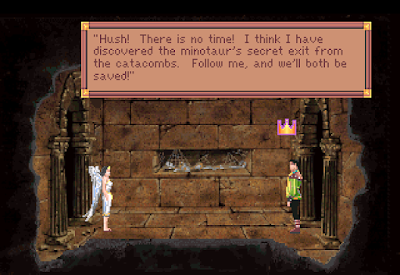 Although I didn’t see her eyes glint, I suspect she’s related to the creatures who’ve been tempting me to my death throughout the game.

Reloading, I ignore the fake Winged One, and continue exploring – I end up in a room where the doors close and the ceiling descends. 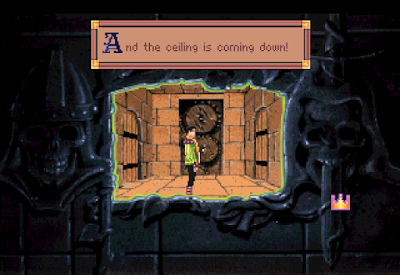 I look in my inventory for something that might help.

And, for no apparent reason, after stopping the ceiling from coming down, the doors automatically open. What luck and/or plot convenience!

I realised at some point in my catacomb wandering that I could put the hole-in-the-wall on a wall to see through to the other side. Unfortunately this doesn’t work when it would be useful – to avoid falling through pit traps.

Then again, there is one pit trap I need to fall into 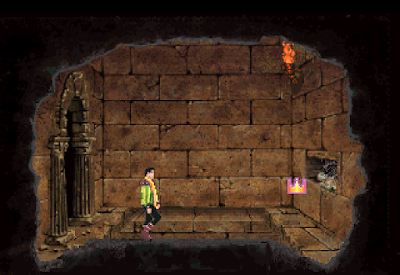 Having chosen to take the tinderbox from the pawnbroker before exploring the catacombs, I use it now. 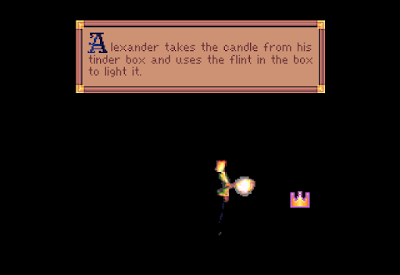 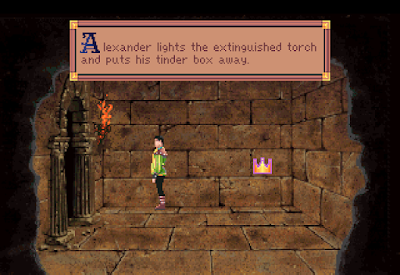 Being in a second level of the labyrinth, and being concerned that I missed an important item in the first level by not mapping, I map the second level. I continue to hear the sounds of an animal on occasion, but one of those occasions is different to the others… 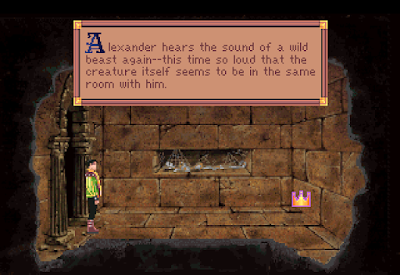 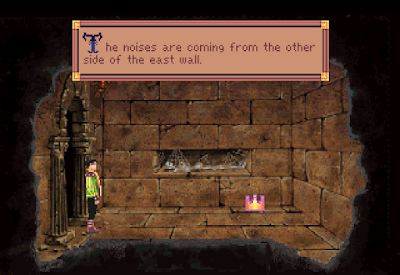 Having already discovered that the hole-in-the-wall works in the labyrinth, I use it now. 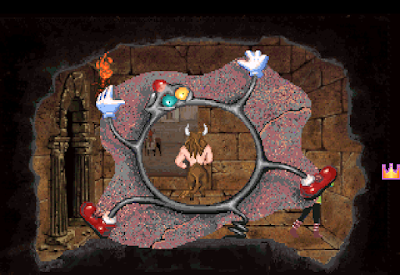 The minotaur presses something behind the painting and enters a secret room.

Seeing the minotaur scares the hole-in-the-wall, so he runs away.

I follow the catacombs and find the room to the east of where I’d put the hole-in-the-wall earlier. 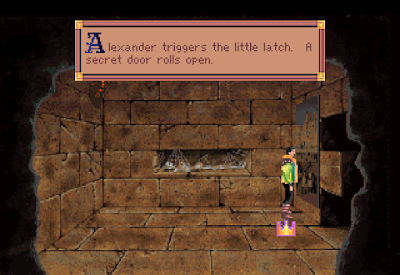 Being slightly concerned that I missed a sword or other weapon because I hadn’t mapped the first level of the labyrinth, I nonetheless continue on – I try to arm myself with the shield, but Alexander refuses to use it because he ‘has no reason to use the shield here’ – fear of giant minotaurs isn’t a reason? Oh well, I continue through the secret door anyway.

My first thought is that if I can sneak past the minotaur, perhaps I can find something in the next room, so I attempt not to get his attention while his back is turned…

The minotaur turns around and threatens me. We circle around the room, swapping positions. I’d already thought about what might help me survive this encounter and the position we both ended up in made me even more confident of my idea. 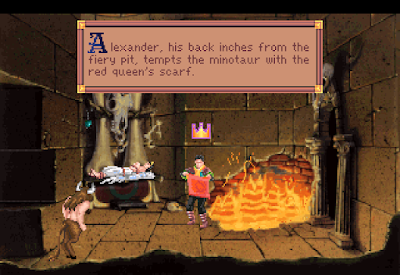 Having dispatched the minotaur, I go to rescue Celeste, certain that she’d be a much nicer ruler than her parents.

Celeste has a dagger in her belt that the minotaur hadn’t taken because he’s an idiot. After freeing her with the dagger, she lets me keep it.

Azure and Aeriel are very… grateful?

The guards fly me to meet the oracle – she tells me a lot of potentially useful information. In summary… 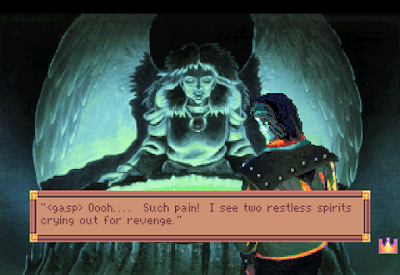 After she finishes prophecising, she gives me a bottle of sacred pool water and I leave.

Now that I have a shield from the catacombs, I try to use it to get into the garden on the Isle of the Beast.

I take a rose from the garden, but can’t progress further as the hedges move to block my path. Celeste’s dagger isn’t strong enough to cut through the magical hedges, so I’ve made as much progress here as I can for now.

Having previously turned down my bad smelling flower, the nightingale takes the offering of my new white rose.

While on the island, I swap my tinderbox for the paintbrush, as that’s the only one of the merchant’s items I haven’t yet used, then go to try a different island. When I open my map, I notice something new in the bottom right corner. 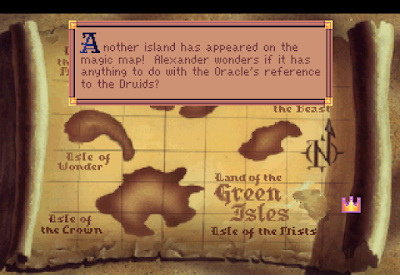 ISLE OF THE MISTS

When I arrive at the beach, I hear chanting to the north, so I go that way.

They are pleased to have me their in the middle of their rain festival, and generously allow me to be part of the festivities.

They move my wicker cage (which I shall call Nicholas) over the fire. Without being able to interact with anything, I get progressively hot until…

With the death screen telling me I should have been better prepared, I go back to the Isle of Wonder

I came here planning to take an iceberg lettuce in order to put out the Druids’ fire, but I notice a new item that has appeared on the table. 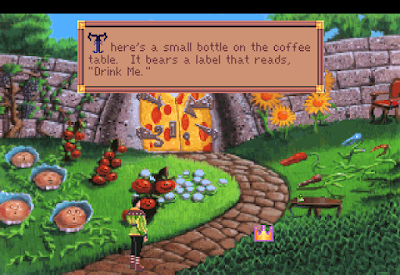 Before doing the obvious, I save my game, then proceed. 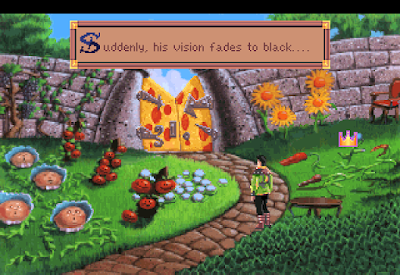 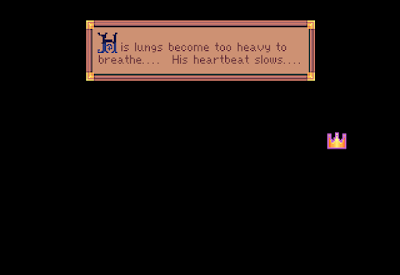 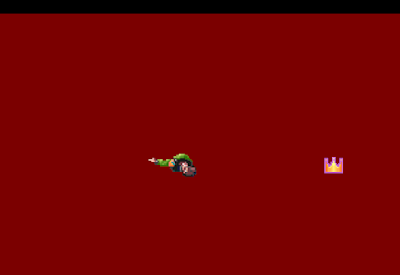 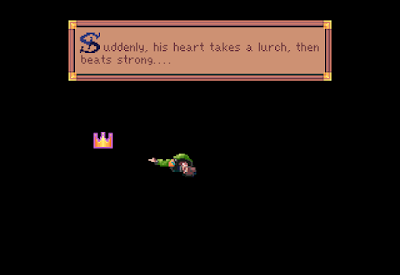 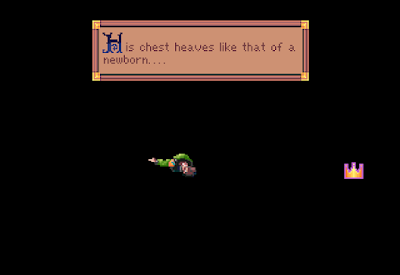 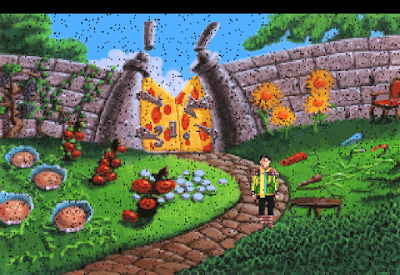 I first try going to the Druids with my iceberg lettuce but it doesn’t help. The fire doesn’t go out and I can’t actually do anything because the whole scene is non-interactive.

Then I try to fake my own death in front of a witness, hoping that this might send me to the land of the dead so I can get the final ingredient of my magic spell – some Styx Water.

I reload and try the same trick elsewhere – Alex doesn’t want to frighten the bookseller and refuses to try for the ferryman. The castle’s guard dogs just ignore his death and resurrection completely.

Back at the Pawn Shoppe, the shopkeeper is happily willing to swap the pearl I took from the oyster for my insignia ring.

I once again offer more things to the nightingale. He takes my newly reaquired ring to the castle like he did my white rose. When I leave the screen and come back, the bird drops something at my “feet.” 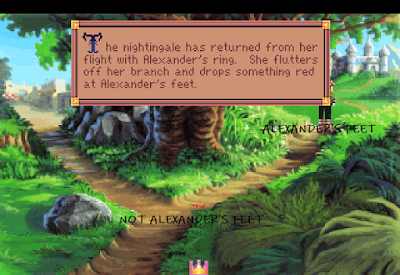 It’s a red ribbon. When I use the ribbon in my inventory, I find a strand of black hair that smells like perfume – could it be Cassima’s hair? Because if it is, and she’s going bald, I’m frankly no longer interested in her.

I try my Near-Death Potion in front of anyone else I can think of, human, plant or chess piece, but have no luck.

ISLE OF THE MISTS

Going west instead of north at the Isle of the Mists takes me to the Druids’ empty village, where I find an item that sticks out from the background. 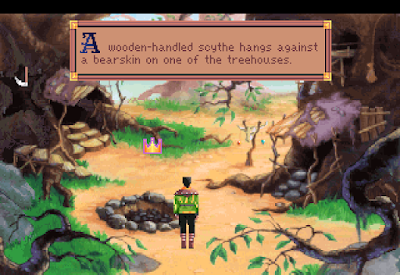 The doors are locked, but I can take the scythe, as well as a lump of coal from the firepit.

I take my scythe back to the hedge I was blocked by earlier. 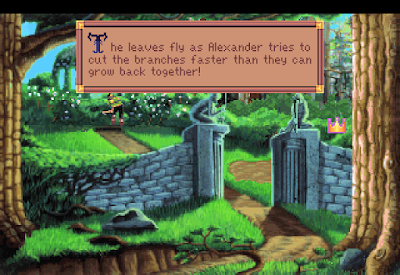 I make it through the hedge, and meet Beast!

If I’d been a fan of the Beauty and the Beast cartoon with Prince Alexander’s actor playing the Beast, I might have found this scene surreal, but I’ve never seen the movie.

Apparently the Druids have stolen Beast’s coat of arms (once again, I suspect this was actually the Vizier making the Islands’ leaders hate each other,) but that isn’t my most pressing issue. Beast tells me that by entering his garden, I’ve become victim of the same curse as he did, and will soon become a beast myself.

There’s only one way to break the curse on us both.

He gives me his token so I can give it to a maid willing to live with him. She must accept it and his hideousness willingly.

Beast leaves, and by sheer coincidence, I left the game running while I made a cup of coffee. I came back three minutes later and…

Reloading, I follow a hunch and go straight to the Isle of the Crown, to the house of the girl I’ve thought of as Cinderella.

She’s always been tending roses, so I show her my white one (I picked up a new one after giving my first one to the nightingale.) 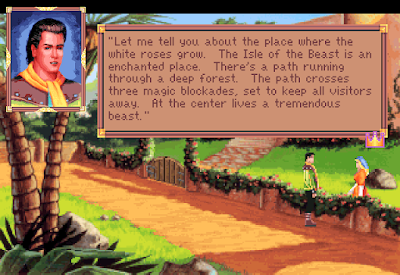 I tell her about the island, and about Beast. She pities him. 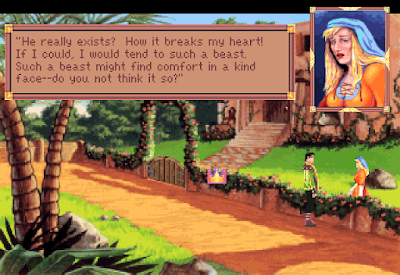 I suggest she come to live on the Isle of the Beast. She wants to come, but is slightly nervous.

She gets ready to leave with me – she has no possessions, because her stepmother is, like all fairytale stepmothers, a bitch. As we’re about to leave, the door opens, and I find out Cinderella’s real name.

I take Beauty to the Isle of the Beast, and Beast is amazed at Beauty’s lack of hate. 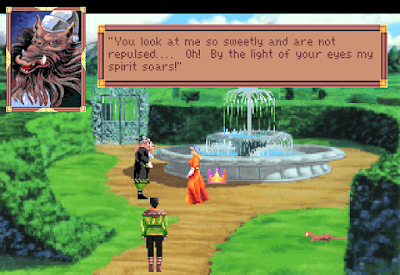 Magical stuff happens to Beast as he transforms…

Beast, having learned humility, refuses to let Beauty be his serving girl, and takes her as his queen.

Having made them both happy, Beauty offers me her dirty servant’s outfit.

And Beast offers me a gift of his own.

Now that I have my servant outfit, I go back to the Isle of the Crown to see if I can sneak into the castle.

Being as convincing in my serving woman disguise as Bugs Bunny is whenever he wears a dress, the guards let me into the castle. Alexander immediately removes the disguise because he’s more concerned about Cassima seeing him in drag than actually saving Cassima at all.

I enter the door to the north. 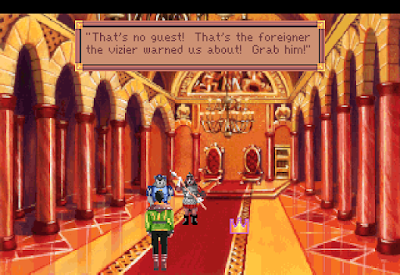 And on that note, I’ll take a break and properly explore the castle later. But before getting into the numbers, I’d like to mention how I like the way this game shows things that will become useful or interesting later. The Cinderella/Beauty character had multiple times been gruffly told to get back to work when I passed her house, so upon getting Beast’s quest, she’s the only person I thought of. The people luring me to my death and the animals seemingly watching me with interest as I proceed in my quest also add to the sense that something larger is going on. Nice work, game! 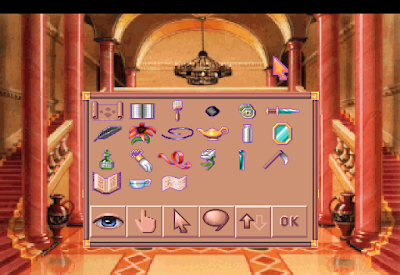