Treasures of the Savage Frontier gives us a plot in which an authoritarian regime from far to the east collaborates with local plutocrats and religious fanatics to wage a war of mis-information, thus demoralizing and destabilizing the free people of the west, ultimately effecting changes in leadership. Ah, the wild imaginings of fantasy!
Indeed, the axis of the Zhentarim, the Hosttower of the Arcane in Luskan, and the Kraken Society of the Trackless Sea has done such a thorough job planning this campaign against the Lords’ Alliance that one wonders why the Zhentarim attempted a more conventional invasion in Gateway to the Savage Frontier. (I think those three are the key partners. I’m not sure if the pirates from Luskan are a fourth organization or whether they’re associated with the Hosttower or the Krakens. Also, the Temple of Bane is somehow involved, but they just seem to pop up any time an evil plan is afoot.) Remember, no significant time passed between the party winning Gateway and getting sucked into this new conflict. The schemers were able to launch their Plan B so immediately that the game mostly consists of the party mopping up damage already done.
Vital to the evil plans are a series of documents–for some reason called “lucky papers”–that describe the axis’s plans for each city in the Lords’ Alliance (or, at least, most of them). To fully read the papers, you have to have three gems–blue, red, and green–each color carried by a different faction’s agents. I believe green was the Hosttower, red was the Zhentarim, and blue was the Kraken Society. When you fight a group of people carrying these gems, you always get the color of the first enemy that you kill. After that, everyone else present shatters their gems so that the party won’t get a complete set.
As Null Null pointed out in a premature comment, but I soon discovered anyway, the party’s prioritization of mages means that you end up killing a lot of green-crystal holding enemies first, which makes it harder to get the other two crystals unless you specifically target them. Once I realized what was happening, I used “Hold Person” spells to paralyze and then kill Zhentil Lords and Kraken agents during first combat rounds.so I could get their gems.
I didn’t get all three until nearly the end of this session, but once I had two, I could take a pretty good stab at what the various papers said. I don’t think any of them were fully necessary to “solve” their associated cities, but they all added some fun background to what was going on.
When I last wrote, I had mostly finished with Loudwater, where I had simply stopped on my way between Llorkh and Secomber. A rematch with the harpies went in my favor, and I cleared out an area of undead (very easy with three characters capable of turning) for some grateful residents in exchange for a Cloak of Protection +2. (I always forget the rules of cloaks and rings of protection if you already have magic armor. Some combination of them do not stack, although I’m not sure how saving throws are affected.) Ultimately, I’m not sure there was anything necessary in the city.
I moved on to Secomber, which turned out to be less than a half-city (coordinates occupying only 7 x 15). There was one major battle with axis members, difficult because they had multiple mages and were arranged in multiple groups. Initiative is vital in such battles. If the mages are able to get off a few “Lightning Bolts” or “Ice Storms” before I can nullify them, the battle often results in a reload. I find myself using ranged weapons more in Treasures than in previous games, always attempting to strike each mage before he or she can cast.
We visited Amanitas, who told us that ambassadors from Neverwinter and Mirabar were traveling to Waterdeep to discuss the situation, and that we should meet them in Leilon to escort them. He also gave us a magic crown that would allow us to communicate with him without walking all the way back to Secomber. It added a “Crown” option to the party’s encampment menu.
At this point, I had the choice to head directly for Leilon or to take routes through other cities first. I chose the latter option because I wanted to test how well the game lived up to its open-world nature. I get annoyed with games that pretend to be open-world (allowing you to travel anywhere) but in reality enforce a certain linearity in encounters. In Gateway, for instance, visiting a couple of cities out of order screwed up a plotline with a dwarf NPC. A good game separates the territory from events that occur within the territory, but the Gold Box titles have been wildly inconsistent in how they handle this.
Here, they seem to have done a decent job of anticipating a rogue player. By visiting Daggerford before Leilon, I solved a part of the game earlier than anticipated, but not in a way that had an effect on other encounters. Daggerford is referenced in one of the “lucky papers,” with the author saying that the axis would have to control Daggerford and the Way Inn to besiege Waterdeep from the south. Sure enough, when I arrived, I found Zhentil troops patrolling the streets and most of the key figures of the city locked up. 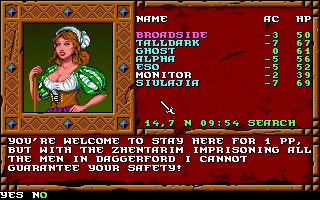 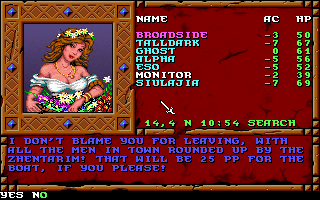