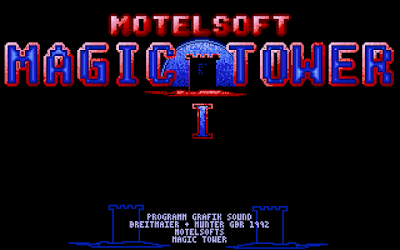 Magic Tower I: Darkstone Ritual
Germany
Motelsoft (developer and publisher)
Released in 1992 for Atari ST
Date Started: 9 April 2019
This is my third attempt to play a title from the German developer Motelsoft, which cranked out at least 23 mostly-forgotten RPGs (as well as lots of non-RPG titles) between 1988 and 2003. A partnership between two developers, Harald Breitmeier and Heinz Munter, Motelsoft favored the Atari ST for their first 7 years but ultimately switched to DOS and then Windows. To call their games “obscure” is almost an understatement: Of the few sites that carry any information about Darkstone Ritual, almost all of them have overlooked the fact that the main title of the game is Magic Tower I. But Motelsoft made up for notability with quantity. Based on the information on their web site, just two programmers produced between 5 and 12 games per year for almost two decades. If they borrowed many of their elements from other games, the speed and skill with which they did so is still impressive.


My first attempt at a Motelsoft title, 1988’s Seven Horror’s, went okay, but without documentation I never really knew what I was doing. The main party was composed of monsters, with weirdly-named character races like “hunches” and “megrims.” The goal seemed to be the collection of seven artifacts from various dungeons, which I did, but I still couldn’t figure out how to win. It just occurred to me that the game ought to go on the “Missing and Mysteries” list. My attempts to play Sandor (1989) were also hurt by a lack of documentation, plus the fact that I only seemed to have an evaluation copy. The game was a little more developed as an RPG and seemed to draw inspiration from SSI titles, particularly Demon’s Winter (1988). I never found any obvious source for Seven Horror’s.

It was thus without much expectation that I fired up Darkstone Ritual and almost immediately found myself intrigued. To start, the creators had clearly been exposed to Might and Magic III (1991), which means they had to program Darkstone Ritual quite fast. Not only have they replaced the attributes of the previous titles with the standard Might and Magic set (might, intelligence, personality, endurance, speed, accuracy, and luck), not even bothering to translate their abbreviations to German, but they’ve done a decent job mimicking the Might and Magic III character and inventory interfaces. Not only did they do this visually, such as the separation of equipment into different categories, but many of the mechanics also work the same way; for instance, clicking on an item in one character’s inventory and then clicking on a different character will transfer the item.

The outdoor interface remains top-down like the previous Motelsoft titles, but it’s very in keeping with the Might and Magic III experience. The world is tiled, with little huts and caves dotting the landscape, most offering a textual encounter with an NPC. There are forest and mountain squares you can’t navigate until you have the appropriate skill

Once you enter a dungeon, castle, or other indoor area, the game switches to a first-person view that at first reminds you more of Dungeon Master than Might and Magic III, particularly with its navigation arrows and the switches to open doors. But the nature of the encounters within the dungeon are more in keeping with the Might and Magic tradition.

Combat goes its own way, slightly. The developers unfortunately didn’t have the ability to show monsters in the environment, so combats pop up randomly as you explore, more like Might and Magic II than III. You get two combat options: schnell (“fast”) and strategie (“strategy”). Fast combat plays a lot like Might and Magic III, just on a different screen. Each character acts in turn, attacking, parrying, using an item, or casting a spell, and the actions execute immediately like in the Might and Magic series (and unlike the Wizardry and Bard’s Tale series, where they line up and then execute together). You cannot specify a particular enemy in this method.

The strategic method offers the same options, but on a gridded map, where you can position your characters around specific enemies. It takes longer because you have to move and specify facing directions, but it’s a better way to fine-tune your combat and prioritize specific foes.

This is all a huge step up from Seven Horror’s and Sandor (in between, I haven’t played 1991’s Projekt Terra or Sandor II yet), and it has the makings of an authentically fun game. I’m still figuring out quite a bit. In addition to being in German, which requires a translation pause on many screens, there appears to be no extant manual, and I have no idea what the main quest is.

I’m particularly keen to see how the spells develop. The cleric starts with just “Close Wounds” and the mage starts with just “Identify Monsters” and something called “Single-Shield.” Other classes have spell points, suggesting they will eventually get spells. The game requires gems for some spells, again borrowing from Might and Magic.

Unfortunately, there are a few underdeveloped areas. The game seems to have no character creation process. It just starts you with a paladin named Monky, a knight named Sirus, a thief named Ellie, a priest named Knorr, and a sorcerer named Laura. (The classes have also changed to Might and Magic standards, though not all of them.) “Monky” and “Knorr” were also default character names in Seven Horror’s. If there’s any way to dump the default party and create your own, I haven’t found it yet. But perhaps the worst part of the game is that absolutely nothing is accomplished with the keyboard. You have to click around with the mouse to do anything.

The party starts on an overland map with a few visible structures. The closest, a hut to the west, a guy named Kalak offers to sell grundausstattung (“basic equipment”) to the party for 2,500 of its 12,000 starting gold pieces. This automatically equips each character with a kleines messer (small knife), a cap, a frock, sandals, and a wooden shield. This is a nice shortcut, though I would have still preferred a full equipment shop.

Nearby, entering a cave brings up a screen that challenges me to press four buttons in the correct order. No matter what I do, I find myself in a dungeon. A large castle-looking building to the south also has a dungeon.

Southeast of that is a tent where “Mira the Ranger” offers to teach me “Forestry” for 15,000 gold pieces. Either that or the “Mountaineer” skill is going to be necessary to progress very far, because in almost any direction there are objects that tell me I need those skills at a particular level to move on. In another hut, a guy is selling “information about Umure” for 200 gold pieces. I say yes the first time, and he tells me that there are 9 “marauding groups” lurking in the city, and that I should come back when I’ve “done it.”

Combats and treasures show up as you explore wilderness squares. So far, I’ve determined that the game has a skill system that determines what items you’re able to wield and wear, but not much more than that. There’s a food system and a rest system. Clicking other buttons brings up screens that suggest that someone with “Clairvoyance” skill can get an automap of the area. There’s a button that seems to automatically take the party to the exit of the dungeon if they’re deep into it, and another that allows you to wait in ambush for enemy parties. I haven’t yet explored the nuances of any of these things.

I leave you exploring Umure, which seems to be more a city than a dungeon. It has some marauding enemies, yes, but also a proper equipment shop, a tavern, a temple, and a training facility, again much like a Might and Magic town.

I haven’t made a lot of progress, but I think I’ll leave things here for the opening entry. My readers have a way of turning up documentation that I can’t find. Motelsoft may have “borrowed” a lot for this one, but so what? It looks like the result is going to be fun.